Eric Woltman is from the south west suburbs of Chicago and has been swing dancing since 1998. He learned how to Lindy Hop under the instruction of Nicolle Wood. In addition to swing dancing, Eric has learned social and competitive ballroom and Latin styles of dance. Eric is also a music teacher. He teaches k-4 general music and how to play instruments in the beginning band. Eric has also taught swing dancing and Lindy Hop at Naperville’s Frankie’s Blue Room and at the Guava swing night he hosted at the former Route 66 Diner in Westmont, IL. As a performer, Eric has performed a form of acrobatic Lindy Hop on several occasions at the Chicago House of Blues. His attitude towards dancing is: Anyone, who is able, can do it!

Diana (aka DeeDee) Wilson lives in the Western suburbs of Chicago with her husband, 6-year old son and golden retriever. She started taking swing dance/lindy hop lessons in 1997 from Nicolle Wood and Chris Yee and has been social dancing mostly ever since. This year marks her 20-year anniversary of swing! She began social dancing at Liquid in Chicago, then the Willowbrook Ballroom and later Frankie’s Blue Room find the best limo to lga service. She works part-time as a Data Analyst at an insurance company, so welcomes the opportunity to let her hair down and do a swing-out from time to time! 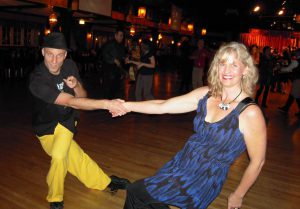